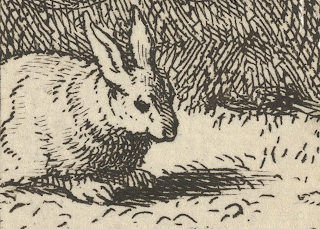 I got up just around sunrise. Before I began making breakfast, I stepped out the front door.

I found myself standing thisclose to a juvenile rabbit, who seemed as surprised as I was. We considered each other for a few minutes. I stood still so as not to startle the little one, and it stood still likely to avoid becoming prey.

This state of affairs, while pleasant for me in the instant, is not how either of us wanted to spend the rest of the day, but I figured it wasn't really my place to make the first move.

Little bun was showing admirable restraint, I thought. I expected it to bolt for the safe cover of the abundant fan palms just a few feet away, but it did not. I could see its nose assessing what it could, its eyes unblinking, its ears folded low trying to keep a low profile.

Then we both heard the sudden whip of air beneath the great wings of some large raptor moving far too swiftly for me to identify, and we both startled from it. The dive was rapid and flamboyant, but unsuccessful. All in what seemed like the same instant, I saw little bun vanish safely beneath the fan palms.

So now the three of us have gone our own ways, one perhaps cross about having to skip breakfast, one surely relieved at not having become breakfast, and one enjoying breakfast while pondering the beauty and fragility of life all around us.