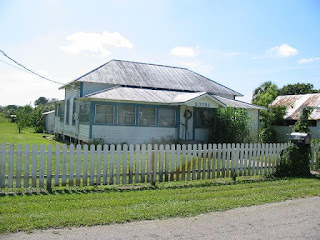 Groundhog Day has always baffled me in that it seems to be a holiday without any social purpose whatsoever. There is nothing to say or buy or do, nothing to decorate, nothing to give or sing, no one in whose honor one could hold a storewide clearance sale. It follows then, that of even less usefulness is today, February 1, which was described to me by my children in a pre-dawn encounter this morning as "Groundhog Day Eve."

There was a minor change in plans: instead of picking up my children from my mother's house, where she often minds them after school for us, I was to pick them up at my grandmother's house. As it happens, my mother also had to care briefly for her mother, filling in for a few hours between the shifts of her live-in caregivers.

My grandmother requires live-in caregivers because disease has deprived her of most of her mental functions, nearly all of her useful memory, much of her vocabulary, and the better part of her personality. She still looks and sounds like my grandmother, but what little she has to say makes no sense at all.

Her emotions are profoundly muted, and when evident at all, they are seriously inappropriate. She spends some part of every day and every night sitting in her own filth, oblivious to the indecency of it and barely aware when she is found out, showered, and redressed.

My mother had prepared her a bowl of fettuccine with clam sauce, one of the few remaining meals for which she expresses any opinion at all. I sat with her and my mother for about an hour at her dining room table while my children played in the adjoining living room.

The three of us were sitting at a table at which I had eaten weekly, if not daily, for the first several decades of my life, in a kitchen that had provided thousands of spicy and sturdy meals for a spicy and sturdy family, a kitchen that had supported more than its share of wedding receptions, baptismal celebrations, and funeral gatherings. I had learned to write in cursive at this table, and how to do long division, and the right way of telling if a mango is ready to peel. It had been clearly and patiently explained to me at this table that the Damn Republicans were ruining this country and the Damn Democrats would ruin it just as fast were we ever foolish enough and gullible enough to let them have a crack at it, although in some years this lesson had been reversed. At this table, I had read The Yearling for the first time while eating fried egg sandwiches; at this table I had attended to the ruminations of a few Methodist preachers over key lime pie; and at this table I had courted my bride-to-be with trophies of lychees and jaboticabas. I had been bandaged and kissed at this table, spanked and hugged, fed and watered, nurtured and loved.

On this Groundhog Day Eve, though, I was sitting at this table watching what little there was left of my grandmother gently and intently scoop up some noodles on her fork, spin them and tuck them until they were just so, lift them to her mouth and brush them faintly against her lips, then return them studiously and deliberately to her bowl. She then would put down her fork, push away the bowl, and wipe her lips with her napkin. Then she would pull back the bowl, lift up her fork, and begin the entire process over again.

She did this quietly and contentedly for the entire hour, swallowing by accident no more than a quarter of the food set before her.

My mother and I shared more than a few telling glances and meaningful shrugs about all of this. My grandmother's disease is the sort that takes a terrible toll on the patient's caregivers, and it is not surprising that my mother's beautiful bright eyes have lost some of their luster these past few years, her husky good-old-gal laugh often muted, her boundless patience and good cheer often clouded by frustration, fear, anger, and sorrow. My mother and I spoke of little things, happy things while we watched her, comforting one another while we sat at this fine old table together. After all, went the unspoken question, how many more times could we count on sitting at this table together?

Abruptly noticing some sign that my mother and I had apparently missed, my grandmother pronounced that the meal had been concluded, and that was that.

We lifted my grandmother up so that she could limp to her bathroom, we said our good-byes while I collected my children, and my mother scraped up the tattered noodles to take home to the dog.

While I was leaving, I was struck by the bittersweet intimacy of the whole affair: the kitchen table with all those memories, my children playing with toys that had been passed down from mother to me and now to them, the emptiness in my grandmother's face and the worry in mother's. I thought about the coming day when this old house would no longer be occupied, its rock-hard cypress planks standing silent, and its century of secrets and surprises slipping away. I thought about the my mother's dark fears that she might one day find herself playing with her food, as oblivious as my grandmother to the love and concern of those around her. I thought about the strangeness of a time when we can keep our loved ones alive long after their minds and souls have worn out, when we can fritter through our workdays obsessed with ourselves while those who changed our diapers can sit with strangers who are paid to change their soiled bedclothes, when we can find little to do or say about the untidy ways in which many of us end our lives.

Leaving my grandmother's house on this otherwise unremarkable Groundhog Day Eve, I drove home, annoyed at the quiet desperation of everyday life, but somehow finding solace in the silly chattering of my children and in the steely courage of my mother; annoyed at the struggles that so many us of face in secret, but miraculously soothed by my wife's welcoming me home under a typically glorious Florida sunset; annoyed that we know so little about so much, but secure in the sweet and certain knowledge that family cares for family, no matter what, no matter when, no matter why.

And so now it is several hours later: everyone but me is long since a-bed, the dishes from our own dinner have been washed, the doors are locked, and the stars are spinning overhead same as they ever were. The dog has had a fine noodle dinner, and I have had a few hours to reflect, to brood, to wonder at the spinning stars, to be thankful for the blessings of life, of love, of family. Somehow, in the spirit of Groundhog Day Eve, all seems right with the world.